December 26, 2019 / Comments Off on Concrete Wire Sawing Is Perfect For When Other Saws Can’t Manage The Job
Concrete wire sawing gives the most precise cuts on ridges, beams and piers when it comes to making openings in thick walls or removing large concrete structures. Fine Cut’s operators are able to cut through steel and heavily reinforced concrete.
Concrete wire sawing is commonly used for underwater cutting, cuts in restricted or remote areas, cuts that require minimal vibration, anchor door openings and cutting through depths which are beyond the reach of conventional tools.
The concrete wire saws are capable of cutting through stone, cinder blocks, bricks, asphalt, concrete and structural concrete. Some concrete sawing jobs require an over-the-top creativity to solve a difficult problem. The wire saw is perfect for jobs where traditional saws cannot get the job done.  Whether it’s extra-large cross sections, demolition of a large structure like a pier, dock, column, tower, or bulkhead concrete wire sawing will save the day.
Concrete wire sawing can also be referred to as diamond wire cutting. Due to its diamond cutting edge, the wire saw is ideal for segmenting or removing large chunks of reinforced concrete that other saws simply can’t manage. The wire saws can also be configured to tackle such obstacles as steel nuclear reactors or metal engine blocks. 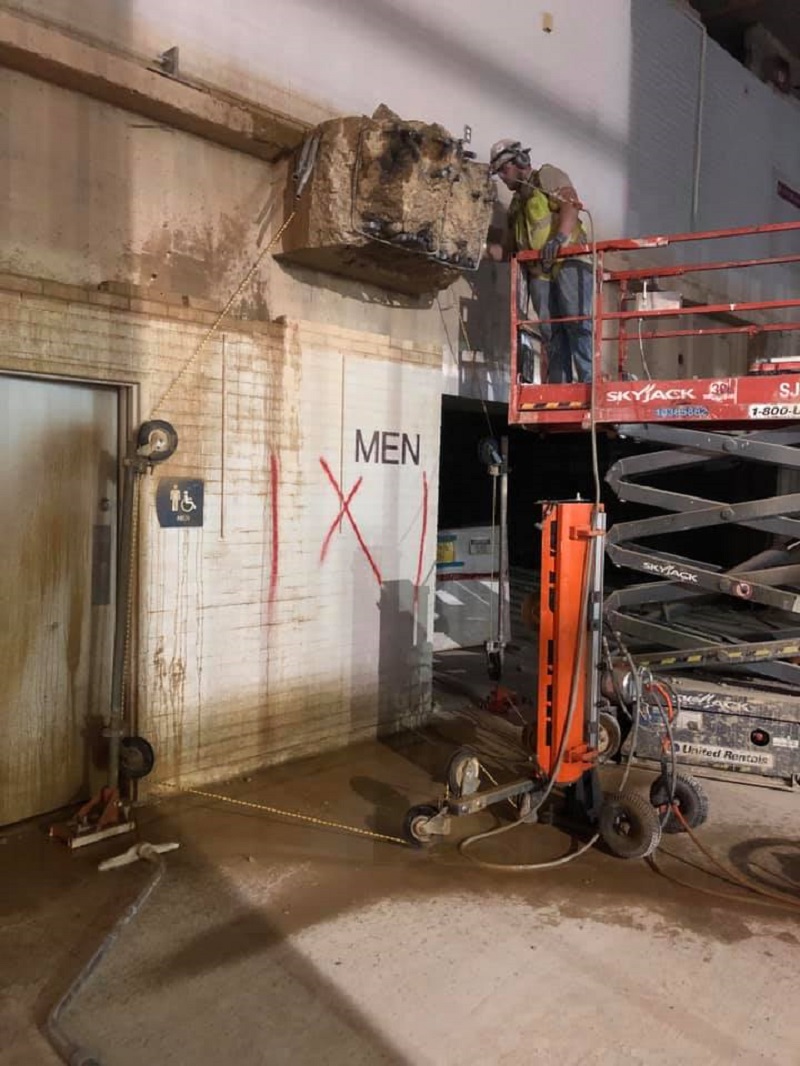 Some concrete sawing jobs require creativity to solve a difficult problem. The wire saw is one way to address large-scale concrete and steel sawing jobs of extra-large cross sections. The advantage of wire sawing is that there is no limit to the depth that will need to be cut. In addition, the noise level is reduced considerably. This is a very safe option when large amounts of concrete are needed to be removed without causing damage to the surrounding structures.
Our history begins when Fine Cut Concrete Drilling and Sawing, LLC first launched as a one truck operation in March 2002. Jim Ralston’s vision began after he mentored with and worked alongside some of the biggest names known in concrete cutting. He set out to make a dream come true with only a handful of customers. Our history at Fine Cut established a foundation based on loyalty and integrity. That foundation grew into a reputable company that now serves the entire Kansas City metro area, surrounding cities and local communities. A dedicated work ethic and determination drove the business toward its continued success.
In 2016, Clay Kohler expanded on Fine Cut’s potential by aggressively remodeling the company’s vision and long-term goals. With Jim’s knowledge of concrete drilling and sawing and Clay’s understanding of managing a business the two joined efforts in making Fine Cut Concrete Drilling and Sawing, LLC a viable company for contractors and homeowners to rely on.

For more information about concrete wire sawing and other services offered, call Fine Cut at (816) 540-5787.
Posted in Concrete Wire Sawing
Scroll To Top